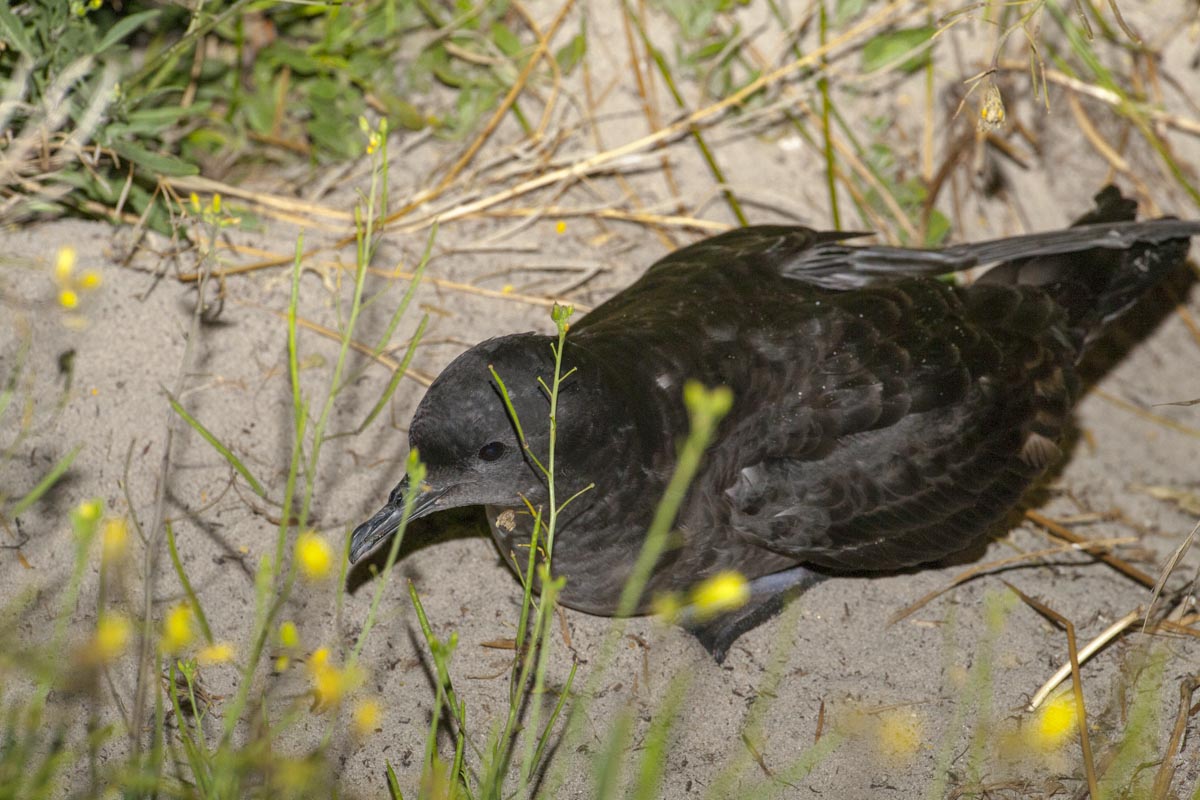 This year in 2019, for the first time in over 30 years, Short-tailed Shearwaters arrived at their breeding grounds several weeks late. In the past, they've rarely returned more than a day or two either side of the 24 September but by the end of October many colonies were empty. Although some have now returned, anecdotal accounts from key colonies in southeast Australia indicate numbers may have plummeted and the blame is being put on loss of sea ice in their high Arctic feeding grounds, where there have also been mass mortalities reported. Since as early as 2014, there were reports of declines by 35% in the colonies in Bass Strait. The consequence of the loss of such a super-numerous bird on global climate and ecosystems isn't really understood but the enormous effect these birds have on ocean productivity can be inferred.  This is an extraordinary situation that should spell concern for anyone interested in climate, fisheries and oceans.

As our boat rounds the bend and Tasman Island looms into view, a breathtaking swarm of birds soar around the steep, Jurassic, dolerite cliffs or swoop en masse into the ocean for food.

Thick in the sky and on the water around this oval, 1.2 square kilometre dot off the south eastern coast of Tasmania, the Short-tailed Shearwater is one of the top five most abundant seabirds in the world.

While we strive to conserve species nearing extinction at one end of a spectrum, super-abundance is an asset to a functioning world at the other.

Short-tailed Shearwater is a global super-power in its own right, a biological machine we have a lot to thank for.

Each September, like clock work, millions complete the mammoth 15,000km annual journey from Arctic Alaska to breeding colonies all over south east Australia.

Colloquially known as “mutton birds” (they are still caught in small numbers to eat today), most hatch their young on islands. Tasman Island caught the attention of businessman and conservationist, Rob Pennicott. Until 1977, the island was a manned lighthouse and weather station, with livestock and cats. The cats killed an estimated 50,000 birds a year for 30 years.

When Rob stepped in, the general thinking was that a bird still culled commercially for food and with numbers in the millions, wasn’t in need of saving. Rob, an avid observer of Tasmania’s wild coasts, thought otherwise.

The island is a launch pad, a place for chicks to call home, while adults ‘pop out’ south to the Antarctic seeking supplies of rich food, for a critical stage in their chicks’ development. 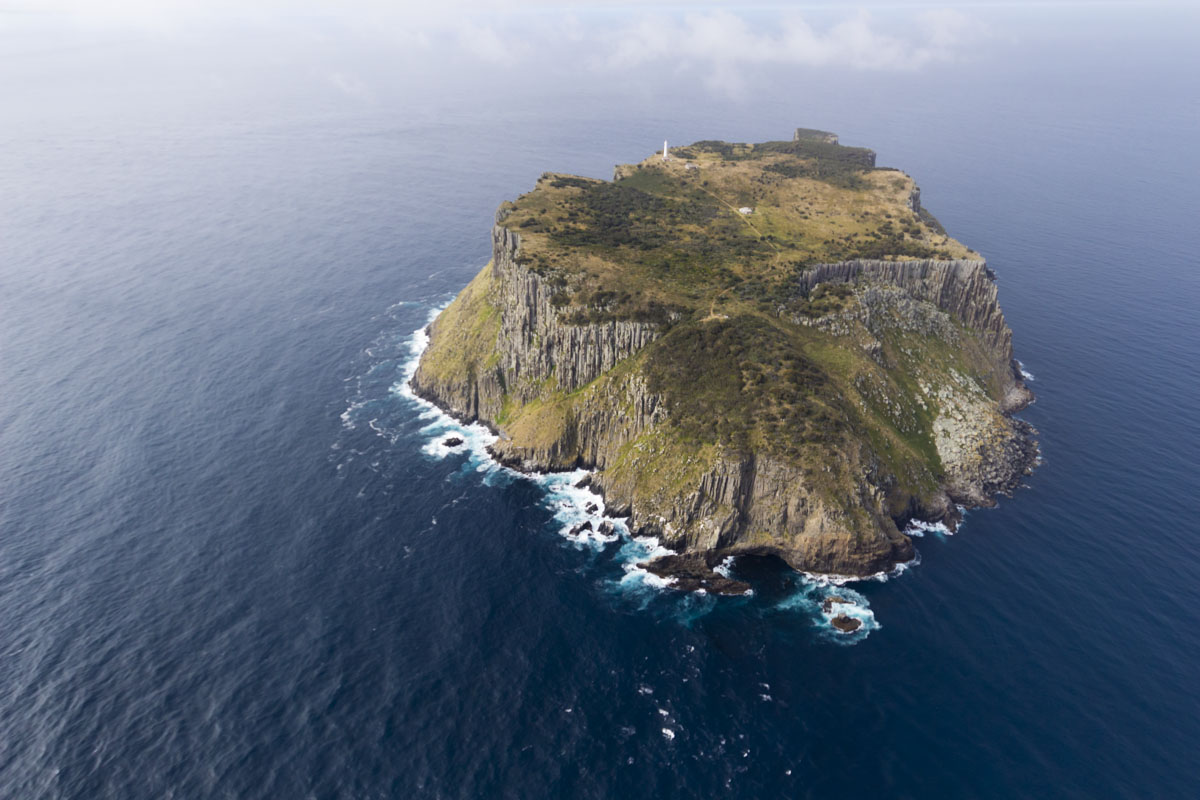 Fuelled by a spectacularly high-energy diet, from pole to pole, the concentrated areas where they land are thought to be among the most environmentally significant ocean ‘fertilising’ sites.

Short-tailed Shearwaters have a high energy demand which comes from frequently diving deep beneath the icy ocean surface to catch prey – constantly losing  then reconsuming heat and energy.  Imagine the energy it would take you to throw a bag of sugar in the air over a distance of 35,000km each year. The energy processed by these birds is unfathomable.

Their prey - krill and small squid - are the super-charged batteries of the ocean food chain, yielding hundreds times more energy, for example, than a hamburger.

Short-tailed Shearwaters eat maybe half a million tonnes of krill and fish each year -  double the catch of all Australia’s fisheries combined.  In calorific terms, they consume the equivalent of Australia’s total wheat consumption for only 150th of our combined human body mass.

Truth is, they aren’t a competitor but a crucial component in a natural supply chain for global fisheries. New migratory tracking data has revealed some spectacularly interesting facts.

Along with a handful of other super-abundant seabirds, they flock to surprisingly small areas, the same areas essential for global ocean processes. 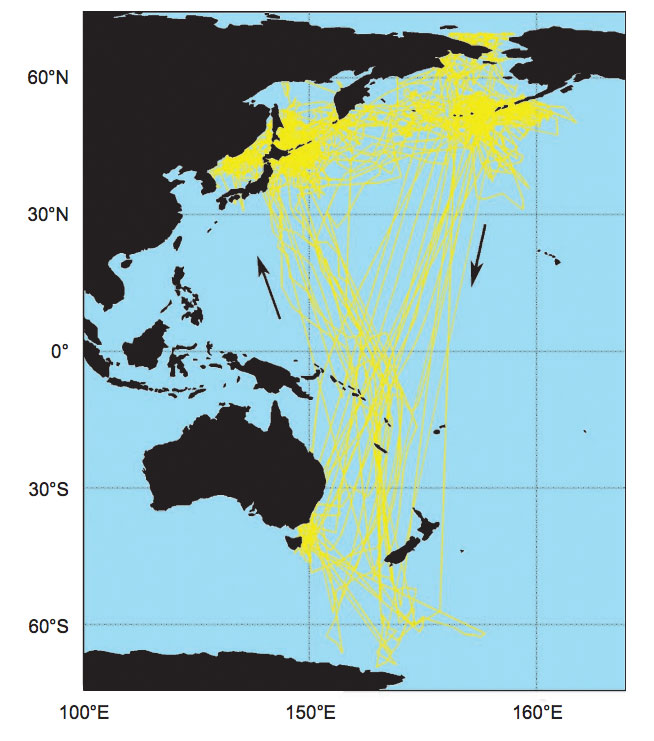 Short-tailed Shearwaters feed in summertime in the high Arctic off Baffin Island and in winter, off the Australian Antarctic. Both regions are mega-rich with seabirds, whales and dolphins, fish and krill. These locations add up to an area not much bigger than the Australian continent.

Any nutrients at sea are absorbed almost instantaneously by a myriad of tiny animals. We can’t live on a soup of plankton and the majority of the carbon in Earth's ecosystems aren't stored in trees but locked up in the processes that birds like this, amplify. For example, if we treated our economy like we do carbon, we would presume it is best locked away in banks. But a $50 note is worthless sitting on a park  bench and only becomes valuable when it's spent. Money circulates, like nutrients in the ocean, as a way to create prosperity. 'Biodiversity' is not the amount of species or the volume of nutrients, it is the rate at which their flow in the ecosystem can be sustained.

The fish we prefer to eat and the climate that allows us to prosper, are all possible, because wildlife regulates the release rate and quantity of these critical elements of life on Earth.

This is where seabirds come in to their own. Their actions create conditions needed for the food chain - its like the great bakeoff on a global scale.  Seabirds constantly stir the surface, sometimes in vast densities, consuming and reactivating its ingredients. Instead of a mouth full of unprocessed ingredients, the end result is a fully-formed dish.

Short-tailed Shearwaters feeding alongside Humpback Whales in the Arctic - our focus tends to be on these larger and less numerous animals. Pictures similar to this have been taken off eastern Australia.

During the continually lit polar summers, nutrient-rich guano is re-absorbed by algae and recycled again at the surface, all the time refuelling the supply to other animals, generating rich fisheries and also ‘raining’ vital material into the deep ocean - this surplus is re-used later, like the ultimate in composting.

Even on the breeding islands, they are fantastically important. Though Short-tailed Shearwaters spend only a few weeks a year visiting breeding colonies, they deposit about 6,500 tonnes of guano into our coastal ecosystems. To put this in perspective, the amount of nitrogen and phosphate in their droppings is equivalent to 3.5-5% of the natural nutrient input to the entire Great Barrier Reef. Much more is spread about over their ocean foraging areas.

This nutrient recycling is a stockpile for the future, whipped up occasionally by storms and  currents. It is no coincidence that the Great Ocean Conveyor, a slow-moving current that moves around the planet, surfaces in exactly the same places these birds choose to feed.

These are very important areas of 'biodiversity' where natural processes create and maintain life.

In concert with Tasmania’s Parks and Wildlife, the Tasmanian Coast Conservation Fund, Wildcare and Pennicott Journeys – the feral felines of Tasman Island were monitored with infrared cameras, trapped and removed. When the project started, researchers could be knee deep in dead birds. Today, the cats are gone. People like Rob Pennicott are doing what they can at a local level but will this be enough?

Environmentalists are generally poor at understanding the importance of things until they are gone. This is why we tend to underestimate the significance of abundant species like Short-tailed Shearwaters. It is even harder to quantify their role in the environment ... how can you measure something that is in balance? We only tend to measure change, by which time, it's often too late to reverse.

This year breeding numbers of Short-tailed Shearwaters have plummeted, due to sudden and rapid loss of sea ice in the northern Pacific. Bowhead Whales have even failed to turn up on time. Sea ice has been a lot further offshore and this kickstarter to the annual flourish of nutrients, at which the shearwaters would have taken over, may not have occurred for several years. And we won't know the consequence for some time, as Short-tailed Shearwaters - like all seabirds - have a very large number of non-breeders waiting to step in and take vacated nests. That isn't good news for a seabird, as these individuals are inevitably less capable of breeding and history has shown us that rapid colony collapse occurs many many years later.

We may never know any animal's true significance on a global scale because scientists are conditioned and forced to prove the consequence of change. But if we lose Short-tailed Shearwaters, we cannot ever get them back and we won't have appreciated their value until their gone.

If we had an inkling of the importance of these birds, we may have been wise to  protect them earlier.

So, when you see these or other frantic little birds diving and wheeling in their millions or you hear stories about them in the media, remember give them a clap for what they’ve done for us. Remember, even the commonest species and habitats in your local area add up to a massive impact on your life.

We owe far more than we think to the species we share this planet with. 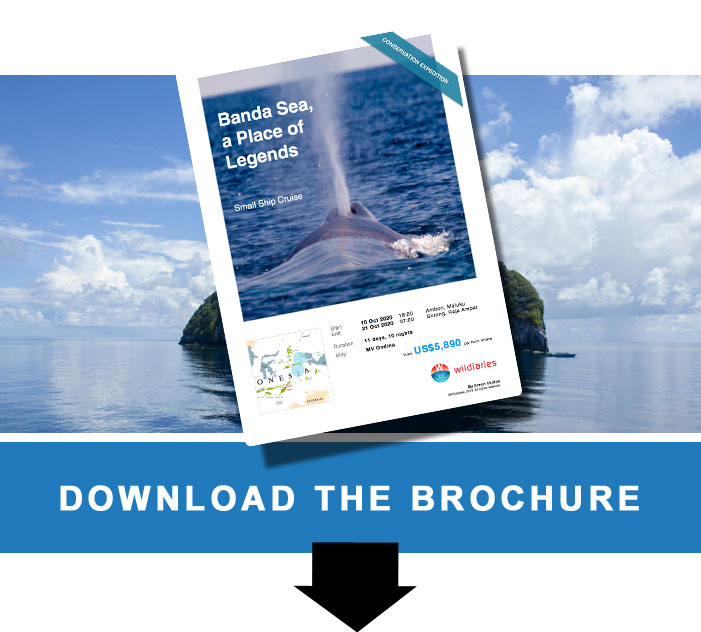